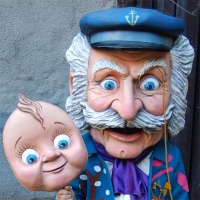 The legend of the Home dels Nassos is found all around the country, and in some places, like Barcelona, he has been made into a capgros, a big-headed festival figure, who walks around on a particular day, in a cercavila procession for the little ones.

Barcelona's Home dels Nassos capgros is an old man with a huge nose and clothes that refer to the passage of time, in this case the seasons of the year. It belongs to Araca de Noé group and is linked to a very specific date: the last day of the year.

The Home dels Nassos is an imaginary character that is a joke on kids. As he appears on 31st December, it is said that he has as many noses as the year has days. The children expect to see someone with 365 noses, because they do not get the trick: that the year only has one day left. So anyone they see could be him.

The capgròs representing the Home dels Nassos is a very recent piece, made by the craftsman Amadeu Ferrer and unveiled in 1997. It was presented at a supper of the satirical group l’Arca de Noè and appeared in public on 31st December of that year, at the group's annual festival.

Since then, early in the morning each 31st December he leaves the Casa dels Entremesos, where he is on display for the rest of the year. He processes around in a cercavila that goes to a point in the city which has been remodelled or renovated during the year, and where there is a festival for children, toy noses are distributed, and everyone is invited to drink hot chocolate in a xocolatada. Afterwards, he goes to Plaça de Sant Jaume, where he greets the authorities and gives the representatives the key that opens the New Year.