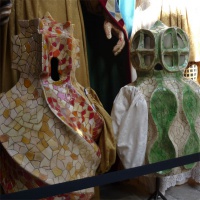 The Pedrera dwarfs, popularly known as Nan Vermell and Nan Verd, are the sons of the Gegants Reis and represent two of the chimneys on the Casa Milà (La Pedrera), made using the trencadís technique. Their mobility is quite limited as their body is all one piece but their arms are those of their carriers, so they can dance and wave. And when the Pedrera comparsa goes out, their job is to entertain the children.

The story of these two nans goes back to 1998 when, following the restoration of the Pedrera, the Caixa Catalunya Foundation decided to create a series of figures to represent the building at cultural and festive events.

They gave the job of making them, like the rest of the Gaudiesque comparsa, to the master giant-maker Toni Mujal and he had them ready that same year. The festival to celebrate the complete restoration of the Pedrera provided an immediate occasion for them to be presented to the public. After that they started to appear at giants' gatherings and parades in the neighbourhood, as well as at the La Mercè and Santa Eulàlia festivals.

In 2011, after being locked away for over six years, they reappeared after Toni Mujal had repainted them and made them easier to carry. Then the Catalunya Caixa Foundation handed them over to the Coordinadora de Geganters de Barcelona, who are responsible for taking them out to dance at local festivals, as well as looking after and maintaining them. When they are not out and about, they can be seen at the Eixample district offices, where they are on permanent display.