The Colla de Diables de Sants began to take shape in 1980, within the Orfeó de Sants choral society. They got off the ground with the help of the Diables del Clot and first appeared in public at a get-together of the Orfeó's sections in the Pobla de Cérvoles.

Then, in 1983, they hosted the 1st Trobada de Diables de Barcelona (Barcelona Devil Meet) in Sants and, since then, they have taken part in the Trobades de Diables de Catalunya.

Their first fire beast, Pitu, appeared in 1985. This dragon is named after its creator Josep Alcober, aka Pitu, who has made other festival figures that have been added over the years: Microones, Dragona, Heura, Sol, Lluna (given to them by the squat at Carrer Cros 10), Boc or Cabró, Rat-penat, Unicorn, Deessa de les Meduses and Xot. In English, that's Microwave, Dragon, Ivy, Sun, Moon, Billy-goat, Bat, Unicorn, Godess of the Jellyfish and Horned Owl. The bat is also the group's symbol. That's why among the devil costumes is one that is black on the back. Their outfits are red with black horns. When they perform, they are accompanied by drummers who have their own section in the group.

The Diables de Sants are very busy in the social life of the neighbourhood. They play an active part in the events organised by the Cotxeres de Sants civic centre and by the district, the Sants annual festival and the festa major in another neighbourhood, La Bordeta, as well as events promoted by various associations, such as the Sant Joan (St John's Eve) celebrations, the communal calçotada  (a meal including charcoal-grilled onions dipped in a romesco sauce) and the Correllengua (an annual campaign to promote the Catalan language). Every year in May or June, the Sants colla is also in charge of organising the activities for Sants es Crema (Sants is Burning), which includes a children's festival, a tabalada performance and a correfoc fire run and a festive event with fireworks.

They have appeared outside the city at various gatherings, festes majors and shows around Catalonia as well as in other Catalan-speaking lands. They have also been to other cities, regions and countries, such as Geneva, the Vall d'Aosta, La Rioja, Occitania and the Basque Country. 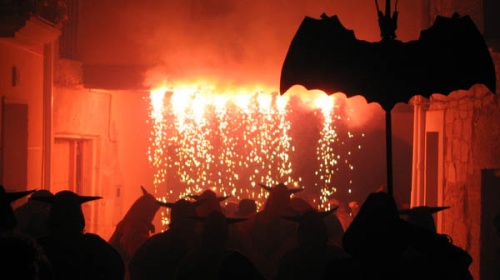 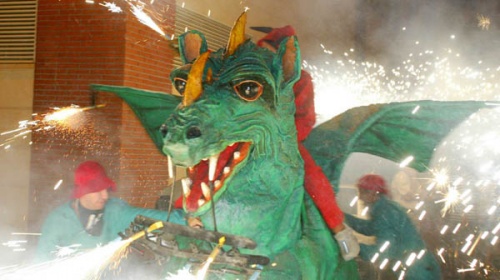