The Diables de la Barceloneta were set up in September 1982 by members of the hiking and ecological groups of the neighbourhood and the free radio, La Gavina. A crisis in 1986 resulted in the group splitting in two. One part called themselves the Colla Vella (the Old Group) and the other, who kept the name, is the one that is active today.

Their relationship with the neighbourhood has always been a very close one, because they take part in lots of events that are organised there, for example, the festa major and the Sant Joan celebrations on the Night of Fire. There they organise a drum tabalada, a devil correfoc and a pregó, or opening speech, and they light the silhouettes of the sun and the moon. The Diables de la Barceloneta also add fire and gunpowder to other traditional events on the festival calendar, such as the Nit d'Ànimes, the Nit de les Llufes and the  Carnavalada. 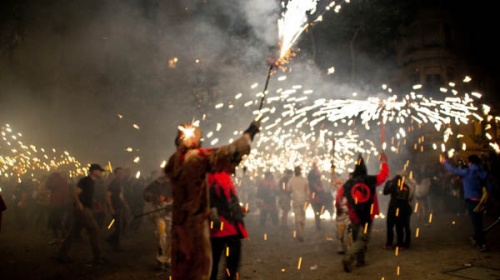