Getting your bearings in the city Find your location in the city

Barcelona is a relatively small city, covering an area of only some 100 km2. Hence it has a human and very comfortable scale that allows you to travel all around it on foot or by bicycle.

It is situated between the River Llobregat (to the south) and the River Besòs (to the north) and between the Mediterranean sea (to the east) and the Collserola mountain range (to the west). 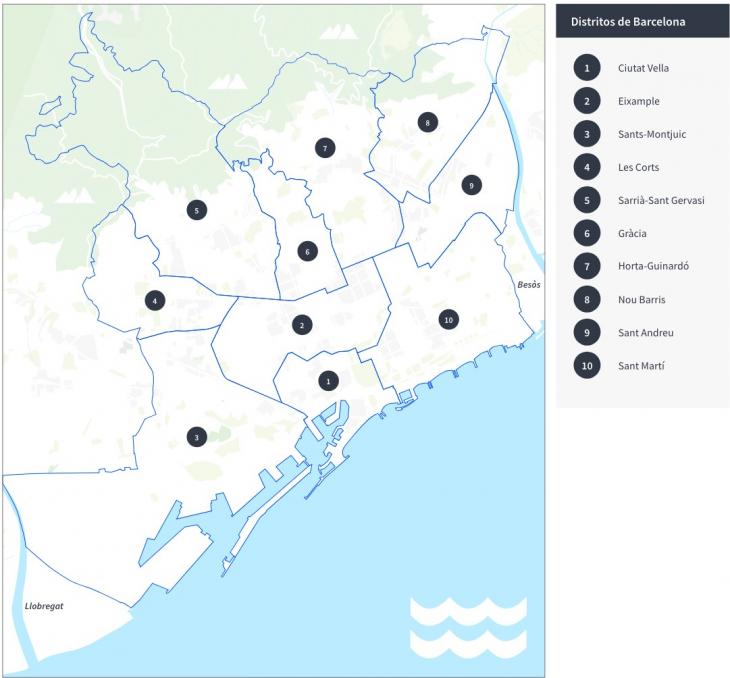 Explore the official map of Barcelona.

The city is divided up into 10districts and 73 neighbourhoods.  You will find information on each district’s features on Living in the neighbourhood.

For further general information on the city, you can also visit the Meet Barcelona website, which is available in Catalan, Spanish, English and French.

When you are inside a building, whether an office or dwelling, remember that the ground floor is usually indicated by 0 or the initials “PB”. Flats located on ground floors are referred to as bajos (in Catalan, baixos, or abbreviated as bxs.).

But flats and offices are also frequently found on a mezzanine floor, between the ground and the first (also known as principal): what are called entresuelos (in Catalan, entresòl, or abbreviated as entl.). Underground floors are usually referred to with minus symbols: “-1”, “-2”, for example. Flats and offices on top floors are called áticos and sobreáticos.

The state's postal service is provided by a public company referred to informally as Correos. It has offices throughout the city. You can easily spot them by their yellow sign and Correos logo.

You can send money by a postal order, post parcels and letters, buy stamps and send registered post or rent a post-office box.

Not all offices have the same opening hours, so it is best to consult a post office's opening hours before you visit it, which you can do on this Correos link.

You can also buy stamps for your letters at tobacconist shops and post them, of course, using any of the typical yellow post boxes you’ll find throughout the city.