Origin of the university

The Estudi General de Barcelona, which would become the city’s university, was founded in 1450.

In the Middle Ages, Barcelona became the Ciutat Comtal (Count’s City) and its political importance increased. It became the seat of the main political institutions in Old Catalonia and that favoured the development of trade which, in turn, led to the city’s growth and expansion, and the construction of some magnificent Gothic-style buildings.

At the start of the 9th century, following the Muslim invasion and the expulsion of the Arabs from the Iberian peninsula by the Franks, the territory of what later became Catalonia was organised into comtats, counties ruled by counts based on the territorial divisions of the Visigothic period. The Comtat de Barcelona (County of Barcelona) was originally established by the ruler of the Carolingian Empire but the break-up of the empire saw Guifré el Pelós (Wilfred the Hairy) set up the Casal de Barcelona (House of Barcelona) as Barcelona was the main county in the Catalan lands and dominated the others.

In the 11th century, Count Ramon Berenguer I proclaimed the Usatges de Barcelona. These rules and customs formed the first Catalan legislative text and sought to solve the legal problems created by the new feudal society. They applied to all of Old Catalonia. With the unification of the various counties in the Catalan lands under the jurisdiction of King Alphonse l in the 12th century, the Principality of Catalonia took shape and, from that moment, the sovereign of the Principality also held the title of Count of Barcelona.

Under the protection of the counts, an agricultural and craft-based Barcelona increased its political and commercial importance and grew rapidly. The ancient Roman walls were now too small, so compact but unprotected urban centres developed round new parishes outside the walls.

During the reign of Jaume I, the Conqueror (1218-76), King of Aragon and Count of Barcelona, government of Barcelona, the Ciutat Comtal, passed into the hands of the Consell de Cent (Council of One Hundred), a new form of municipal government comprising 128 members, that lasted until 1714.

The increase in trade brought lots of merchants to Barcelona and led to the establishment of the Consolat del Mar in 1258. This Maritime Consulate regulated maritime trade and was responsible for the port regulations.

END_OF_DOCUMENT_TOKEN_TO_BE_REPLACED

In 1283, during the reign of Pere el Gran (Peter the Great), the first Corts Catalanes were held in Barcelona with the aim of drafting a Catalan constitution or statute, and this gave rise to the Generalitat of Catalonia, the main Catalan governmental institution which had its seat in the Palau de la Generalitat in Plaça Sant Jaume from the beginning of the 15th century.

Political and commercial expansion led to a glorious age that favoured urban development. First, a new wall was built in the 13th century which expanded the city by drawing the Ribera and Sant Pere de les Puel·les neighbourhoods into it on one side, and reaching the Rambla on the other. Then, a century later, work started on expanding the walled area further to include the Raval neighbourhood and stretching as far as today's Avinguda Paral·lel, finally ending next to the sea. A fragment of the wall built in this final expansion has been preserved along with one of the entrance gates, the Portal de Santa Madrona, at the end of today's Paral·lel and next to the Reials Drassanes, the Royal Shipyards, also constructed at this time and housed in a building that symbolises medieval Barcelona's naval power. Work also started on building a port because, despite the busy maritime activity, the city did not have one.

The Romanesque churches were rebuilt and new buildings went up in the splendid Gothic style that are still preserved today, for example, the Shipyards and the Llotja exchange, religious buildings such as the Cathedral and Santa Maria del Mar church, a perfect example of Catalan Gothic, palaces, mansions, convents, monasteries and many others. A construction fever that left behind a magnificent heritage all round the city.

Origin of the university

The Estudi General de Barcelona, which would become the city’s university, was founded in 1450. 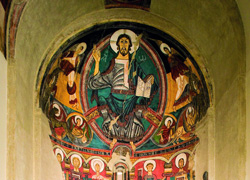 To understand medieval Catalan art you should visit the Museu Nacional d’Art de Catalunya (MNAC - National Art Museum of Catalonia). It houses one of the most important Romanesque art collections in the world, with some outstanding mural paintings, such as the Pantocràtor. 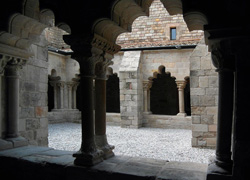 Sant Pau del Camp, the Benedictine monastery in the heart of the Raval neighbourhood, invites visitors to step back into the 10th century, when building was taking place outside the city walls. It is one of Barcelona's best preserved Romanesque buildings. 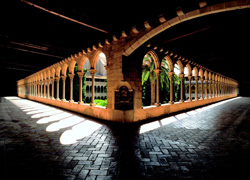 The Monastery of Pedralbes, founded in 1326 on the high ground of the Barcelona plain, is one of the most precious of all Catalan Gothic buildings. In fact it contains what is regarded as the world's largest Gothic cloister, three storeys high. 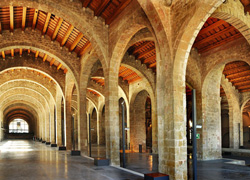 The old Royal Shipyards occupy one of largest and most imposing Gothic-style civil buildings in the city. Now housing the Maritime Museum, it offers a look at Barcelona's sailing history. 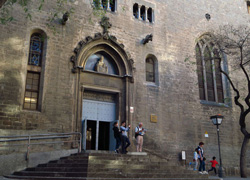 Sant Pere de les Puel·les was a Romanesque convent founded in the 9th century outside the city walls that gave its name to the whole quarter. The church has been preserved, including the remains of the Visigothic chapel that preceded it. 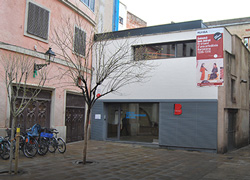 The heart of Barcelona preserves the web of tiny streets that made up the medieval Jewish quarter, the Call, containing what could be the oldest synagogue in Europe. The city's history museum MUHBA has an interpretation centre enabling visitors to learn more about it. 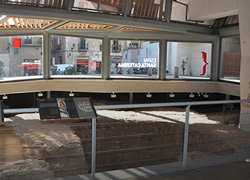 Below the colourful Santa Caterina market lie the remains of the 13th century convent it is named after, regarded as the city's most outstanding Gothic convent, even though it was demolished in 1835. 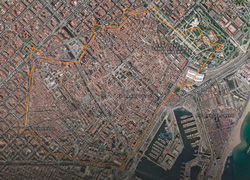 The Barcelona Archaeological Map, produced by the City Council's Archaeology Service, shows users the exact boundary of the medieval wall and that of the modern city.